Anticipation for Bruce Springsteen’s arrival at the Hilton Coliseum in Ames, Iowa, was palpable everytime there was even the slightest pause in the Obama For America Rally program. Coming fresh on the heels of an earlier appearance with President Bill Clinton in Ohio surely added to the excitement as the estimated crowd of 5,000 Iowans knew what is at stake in this election and the magic they were about to experience first-hand. Unfortunately, so did Mother Nature as inclement weather forced some last minute travel changes, delaying Bruce’s arrival.

Finally around 4:30 pm, the familiar voice of President Barack Obama came through the speakers, explaining the power of one voice. A campaign video played telling the story of Edith S. Childs’ now legendary encouragement of the then-Senator in 2008 which spawned the rally slogan, “Fired up, ready to go!”  Peeking from behind the stage curtains, Bruce watched the video intently, seeming to understand the parallels between the power of Edith’s voice in inspiring the President and the power now in his hands to motivate this crowd of voters to act.

The audience roared as Bruce took the stage and they rushed out of their seats and forward to the barricades. “Fired up?” he asked, to which they yelled back, “Ready to go,” as he launched into a six-song acoustic set. “No Surrender” felt like a subtle request for the crowd of Obama supporters, to not forget the stakes of the election at hand in defending the issues that matter to them; a vow they promised to defend while repeating the closing lyrics with Bruce, “No retreat baby, no surrender.”

“I’m here today because for 30 years I’ve been writing about the distance between the American dream and the American reality,” Bruce told the crowd. “I’m here because our vote is one of the principle ways we get to determine that equation, we get to close that distance. Voting matters. Elections matter.”

Continuing specifically to that theme, Bruce segued into “Promised Land” before introducing a new song, “Forward” commissioned by President Obama himself. Comically recounting its origins, Bruce facetiously explained, “Occasionally, President Obama calls me on the phone, sometimes twice a week. It gets a little annoying to be honest with you.” Although only kidding, his impression of the President saying his name would be worthy of a guest spot on Saturday Night Live. “Bruce… Bruce… I don’t have a campaign song! There’s a campaign song gap.” The President suggested using his campaign slogan, Forward, to which Bruce commented, “It’s better than backward. It’s better than sideward. You don’t want the bumper stickers to say sideward.” Realizing rhyming with “Obama” would present sizeable challenges and that “Forward” wasn’t much to work with, the song was understandably brief but not without excellent crowd participation in Bruce begging for shouts of, “Forward!” after each line.

Following this comedic interlude, Bruce returned to highlighting the struggles faced by many Americans and the communal despair it causes. Asking in “The River,” “Is a dream a lie if it don’t come true/ or is it something worse/ that sends me down to the river/ Though I know the river is dry,” seemed especially poignant considering the drought that continues to ransack Iowa farmers this year.

Introducing the only material from Wrecking Ball of the afternoon and only the second time it’s been performed acoustically, Bruce explained that “We Take Care Of Our Own” was posed as a question to America; if a nation is judged by the compassion it shows its weakest citizens, how are we being judged? Do we take care of our own? Specifically, “Where is the promise for sea to shining sea?”

“Thunder Road” concluded the acoustic set, as Bruce looked forward to celebrating an Obama victory in the first week of November and thanked everyone for coming out today. Most importantly, he reminded the crowd to vote and tell their friends to vote, for as we learned from Edith S. Parks, just one voice can change the entire conversation. 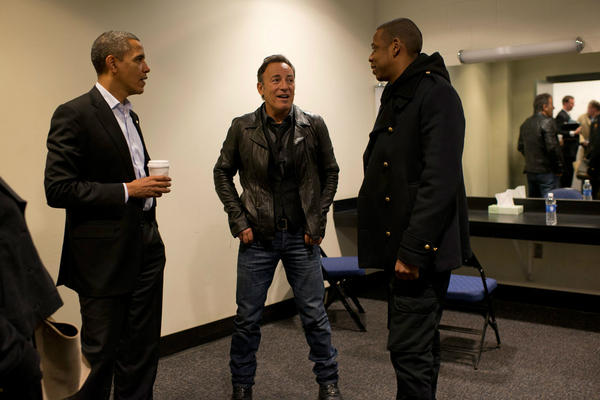