Notes from the road: Brisbane Night #2

48 hours after playing a stunning opening night gig on his Australian tour, Bruce Springsteen has already topped it. Opening the show with his interpretation of the Havalinas’ High Hopes, Bruce kicked off the night in high gear. If the song was unfamiliar to marginal fans, the energy generated on stage wasn’t. Tom Morello lent the song some scorching guitar, while Jake Clemons had his time to shine next on the follow up, The Promised Land.

It was a Saturday night, and there was a buzz in the room. Bruce made it his mission to get the capacity room on their feet and he did … numerous times. After Wrecking Ball and Death To My Hometown, Bruce headed into the crowd for a terrific sing-a-long rendition of Out In The Streets. Australian audiences haven’t quite mastered their part in Bruce’s crowd-surfing display, but we’re working on it and the great man was finally delivered back to the stage intact.

After a cool preamble to Spirit In The Night, the band were off and running on a fantastic streak of songs that took the mood of the night into interstellar overdrive.

Nils Lofgren shone on the introduction to Incident On 57th Street but it was Bruce that drove it home with an absolutely jaw-dropping guitar attack. The River was nothing short of mesmerizing and it’s worth noting Bruce’s falsetto is still in full working order. Atlantic City was re-invented with a chorus that belongs to gospel while another Nebraska cut, Open All Night, was Bruce’s ace in the sleeve for the getting the entire venue ‘off your asses in 90 seconds … wait, make that 120 seconds’. It worked.

Over the course of his career, Bruce has only played Brisbane seven times. The first time, in 1985, was part of the Born In The USA tour. It was one of his first stadium shows, and, judging by number of vintage Born In The USA t-shirts in the audience, it obviously had a big impact on the city. One lucky boy, around eight or nine, mimicked Bruce’s look from the cover of the album – with a red cap in his back pocket. It earned him a spot on the microphone during Waiting On A Sunny Day, which was only bettered by Bruce suggesting the pair embark on a knee slide in the song’s final bars. Super cool: it’s up there with the great knee slide from the Superbowl.

Alongside the core material from Wrecking Ball, which features heavily on the tour, Bruce kept ringing the changes in the set list. Taking a sign request he began his encore, sitting alone at the foot of the stage for an acoustic reading of Blinded By The Light.

Sparks certainly flew on E Street. Only two shows into the tour, Bruce is digging deep into his back catalog. An incredible evening, the next stop is Sydney. Buckle Up!

Photos from the road: Belfast 7/20 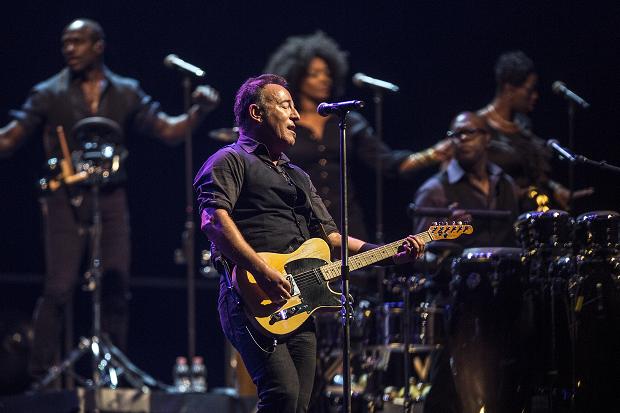