Notes from the road: Kilkenny #1

The Wrecking Ball Weekender kicked off Night 1 tonight with three fantastic opening acts: Josh Ritter, Damien Dempsey, and Glen Hansard. A capacity crowd swelled Nowlan Park in Kilkenny with the excitement honed to a fever pitch by the time Bruce Springsteen and the E Street Band took the stage about 7:30pm. As Roy’s piano trilled the opening notes of “This Little Light of Mine,” Bruce addressed the crowd: “It’s so good to be here in Kilkenny tonight! Let me hear ya! Join us in celebrating the everlasting, unifying power of Rock and Roll!”

“Badlands” followed and the gauntlet was thrown down from the start. Meanwhile, the incredibly responsive Irish crowd took up the song’s chant and gave it right back to the band. They were rewarded with a wilder than usual “Out in the Street” during which Bruce skipped down the length of the stage, checking out the crowd and starting to collect sign requests. Many signs read simply “Thank you Bruce.”

“There’s these kids down there that always try to stump me,” Bruce laughed as he assessed the signs. “I dare you, old man!” At this he brandished a sign for the Sam Cooke classic, “Shake,” given to him by a young lad who couldn’t have been more than ten, if that. “We haven’t done this in many many many moons.” A magical moment followed during which we were able to watch Bruce rehearsing the song on the spot, setting the key, singing the chorus to the band. “Let’s try D! If I get bold I’ll modulate.”

It was absolutely magic. In a split second the massive E Street Band Orchestra turned into a crackerjack bar band and nailed the sucker. Bruce let his backbone slip, the horns blasted, and wide grins could be seen on Steven’s, Garry’s, and Max’s faces. Going with the flow, Bruce next chose a sign request from another young lad, this one for Arthur Conley’s spectacular soul stomp “Sweet Soul Music.” Another one nailed to the ground by the redoubtable E Street Army; the horns more than rose to the occasion and rocked us silly.

Things settled down a bit with what Bruce called a “Rebel Song,” “Death to My Hometown,” a song that has been fiercely resonant here in Ireland. This segued perfectly into a country rockin’ “Johnny 99.” The ‘Nebraska’-era ballad turned rocker was absolutely brilliant, with solos from Soozie and the horns, Curtis on cowbell adding just that special je ne sais quoi to the mix. The chorus provided woo-hoo’s and the horns joined Bruce downstage to bring the song to a thundering finish.

Next, Bruce counted off the rarely played “Stand On It,” a stompin’ B-side from the ‘Born in the USA’ album. He followed this up with “Wrecking Ball,” inciting the crowd: “Kilkenny! Let me hear your voices call! C’mon Irish!” The audience by this point were literally jumping up and down in a frenzy.

“Long Time Comin’” from the 2005 ‘Devils and Dust’ solo album, came next due to a sign request. This had only been performed once before in a full band version, back in June in Coventry. “This is a song I wrote when we’d just had our kids,” Bruce explained. It was frighteningly beautiful, starting off with solo acoustic guitar for the first verse before the band kicked in.

The somber heartbeat kickoff to “Jack of All Trades” followed, Bruce acknowledging the rough times currently in Ireland as well as back home in the States. It was note-perfect and stunning; the powerful thwack of Max’s drum, Curt’s trumpet solo, Nils’ spiritual guitar break, and Bruce finishing up with the bass drum. Another stunner followed: “The River,” with the beautiful two-shot of Bruce and Steven together opening the song, Steven strumming acoustic guitar. The crowd took up the lyric immediately.

Bruce reminisced about a very special day in his memory, the day that the E Street Band first played Slane Castle back in 1985. They had never played outside or in a stadium at that point, he remembered. “So many damn people – it was incredible!” The crowd cheered and waved their hands in the air. “Tonight as a thanks we’re gonna play that ‘Born in the USA’ record from top to bottom.” By this time it should be noted that the show was more than an hour in progress! A thunderous “Born in the USA” shook the foundations of Nowlan Park to start the mini-set. “I’m thirty years burning down the road” replaced the original line “ten years burning down the road” from the 1984 release. Where does the time go?!

“Cover Me” featured a relentless guitar solo by Nils; during “Darlington County” Nils and Bruce sang their duet verse to a red-haired Irish cherub child on his parent’s shoulders; the acoustic guitar kickoff to “Working On The Highway” upped the ante for what has become a spectacular (though rarely played on this tour) piece de resistance; “Downbound Train” spotlighted a fierce guitar break by Steven; followed by a seething “I’m On Fire.” “No Surrender” was a rallying cry; “Bobby Jean” was clearly a crowd favorite; “I’m Goin’ Down” with its syncopated beat is always fabulous. “Glory Days” was spiked with plenty of silly sauce between Bruce and Steven; “Dancing in the Dark” brought forth several young Irish lasses to dance with Clark, Jake, and Bruce; the crowd ate up “My Hometown,” fervently singing the chorus.

“Waiting on a Sunny Day” with Eddie’s terrific baritone sax solo and the choir sounding like a classic Beach Boys background vocal, was next. A little girl from the front was chosen to do the guest verse. As the sun started to slip down from the sky into twilight, “The Rising” began. Many thousands of hands reached towards the sky as Bruce asked us all to come on up to the rising.

“Ireland! This is Land of Hope and Dreams.” The passionate horn blast filled the skies as the song kicked in, more heartfelt than ever as the tour ticks down to its close. The 1965 R&B Impressions’ hit “People Get Ready” brought up the coda of the song, Bruce giving it that extra oomph tonight and Steven adding gorgeous backing vocals. The band then took their bows as the main set finished.

Next, a real treat for the audience: Glen Hansard joined Bruce for one of the best versions of “Drive All Night” I’ve seen, trading off verses. They added a nod to Ireland’s own Van Morrison with a line or two from “Here Comes The Night,” which was sublime. The encores continued with “Born to Run,” “10th Avenue Freeze Out,” and “Shout!” During the “little bit softer now” section Bruce slithered down the mikestand to the floor of the stage joined by the choir and the horns, stripped down now to a t-shirt.

“I’m just a prisoner – of rock and roll!” Bruce screamed to the crowd, who hollered back their approval. A gospel stomp reprise of “This Little Light of Mine” followed, and then he left us with the devastatingly beautiful acoustic version of “Thunder Road” to send us off into the night. 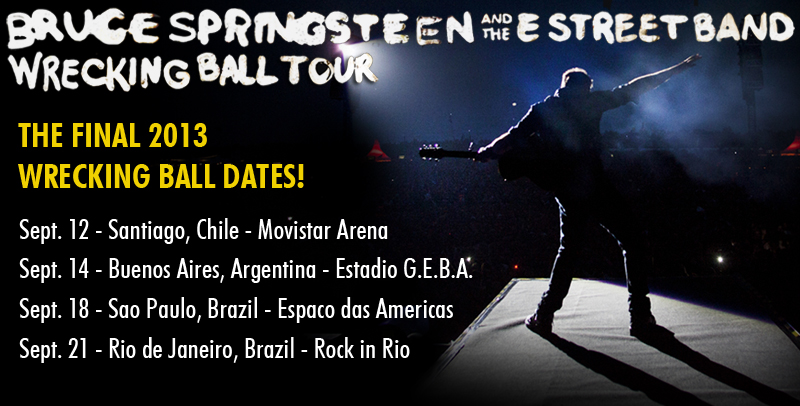 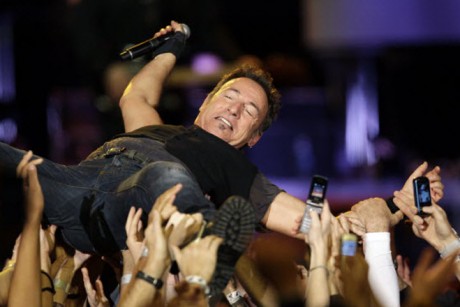 “Love and death on the Springsteen tour” by Salon