Notes from the road: Oslo Night #2

On night one in Oslo, we had the utterly unexpected in the shape of Little Steven crooning “My Kind of Town” to us to open the concert (that is, if you don’t count the four song warm up by Bruce himself, which was as amazing as it was surprising). But for whatever reason — a Monday night, a workday to follow, the second concert of the two to go on sale, crappy arena, or a taciturn crowed — that first night, while spectacular, never reached the absolutely epic heights that we all know Bruce and the band are capable of reaching. So on to night two, when the alchemy, the chemistry, the sheer transference of energy between Bruce at his peak and crowd at their peak happened.

Of the first 15 songs, we had 11 changes from the night before, the only recurring songs being “We Take Care of Our Own,” “Wrecking Ball,” “Spirit in the Night,” and “Death to My Hometown.” As a statement of intent it could hardly be bettered. From the opener, 1992’s “Leap of Faith,” through “The Promised Land” and on to “Downbound Train,” the omens of a great evening were right there at the beginning. “Leap of Faith” was a particularly welcome airing, a song heard rarely if ever these days, given a real shot in the arm by the 2013 E Street Band. “Spirit” was notable for the outstanding vocal contribution from a young lady in the crowd that seemed to take even Bruce aback. I suppose it had to happen: after all these years, he finally found a crowd member who could sing!

Fittingly, the real magic happened during “Savin’ Up,” as if Bruce, the band and the crowd discovered that they had been… well, saving up. An absolutely fantastic version of this soulful song that Bruce originally wrote for Clarence, complete with a rap encouraging everyone to check the balance in their “love account.” From there we moved in to a darker section of the night, with “Atlantic City,” “Murder Incorporated,” and “Johnny 99,” all powerful and all delivered with an intent and a menace that characterizes the very best shows. Nils Lofgren in particular was outstanding on “Murder Inc.,” and the band really shone a light on hard times and desperation on “Atlantic City.”

Even the more “standard” part of the set — “Shackled,” “Sunny Day,” “The Rising” — all did their part to keep the momentum at a high level… and then, “Badlands.” Wow. As an opener or earl number, it’s great. It always will be. But late in the show, when the energy is already high, well, that’s a different story. It had the crowd not just out of their seats but jumping. Several seat-holders were even seen scaling the barriers to get on to the GA floor and no one seemed to care. It was that good. By the time we made it through the high-energy encore (beginning with Bruce alone at the piano for a moving “The Promise”) to “Tenth Avenue Freeze-out,” it was clear that we weren’t going to be let off lightly here. Not that we wanted to get off lightly! So to cap it all, a surprise performance of “Shout” took it all over the top. The lights had been on since “Born to Run,” and the crowd responded brilliantly. We were dismissed into the night knowing that this was one for the ages. You better start savin’ up indeed… we were spent! 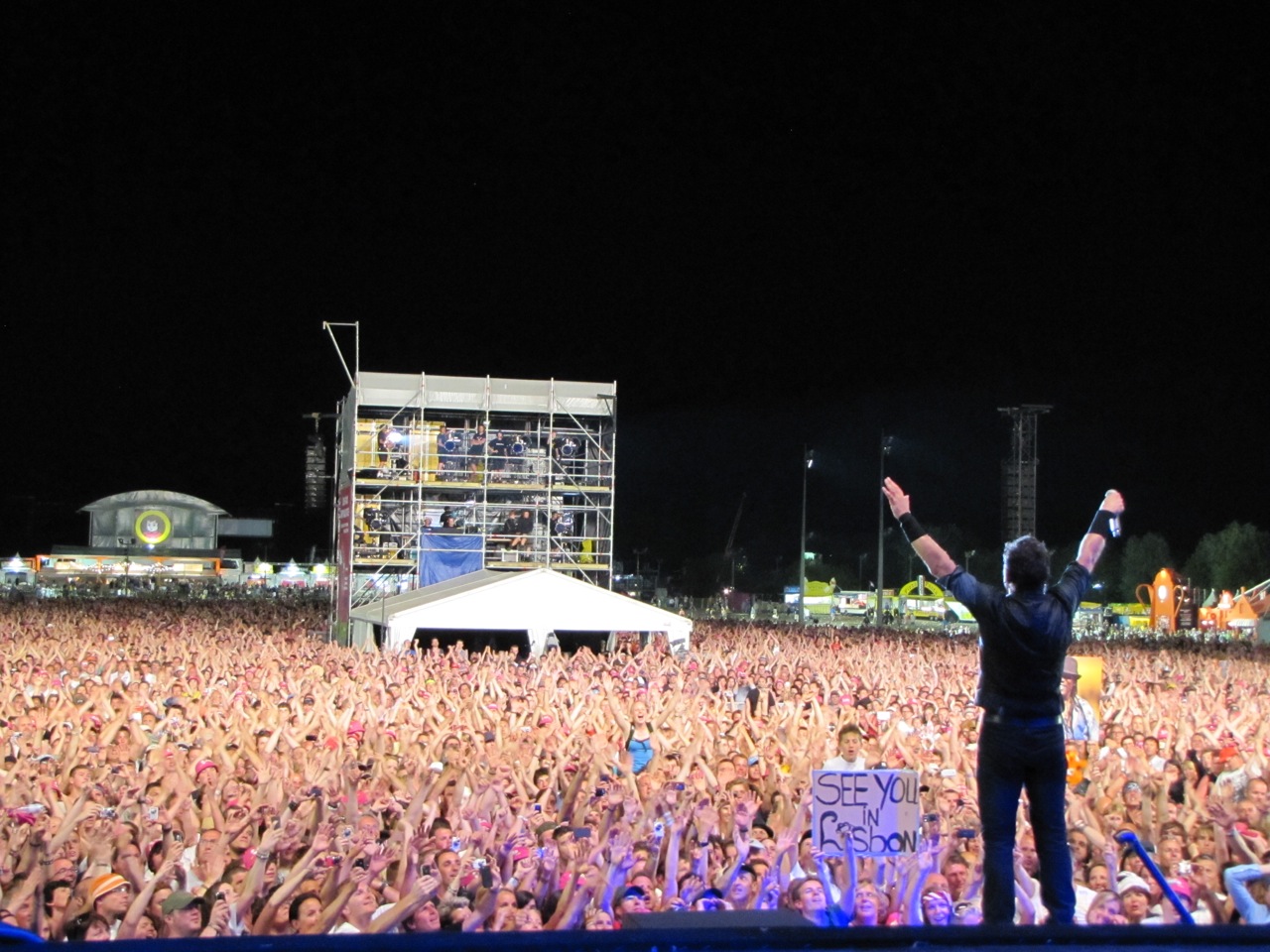 Behind the Scenes photos from Pinkpop 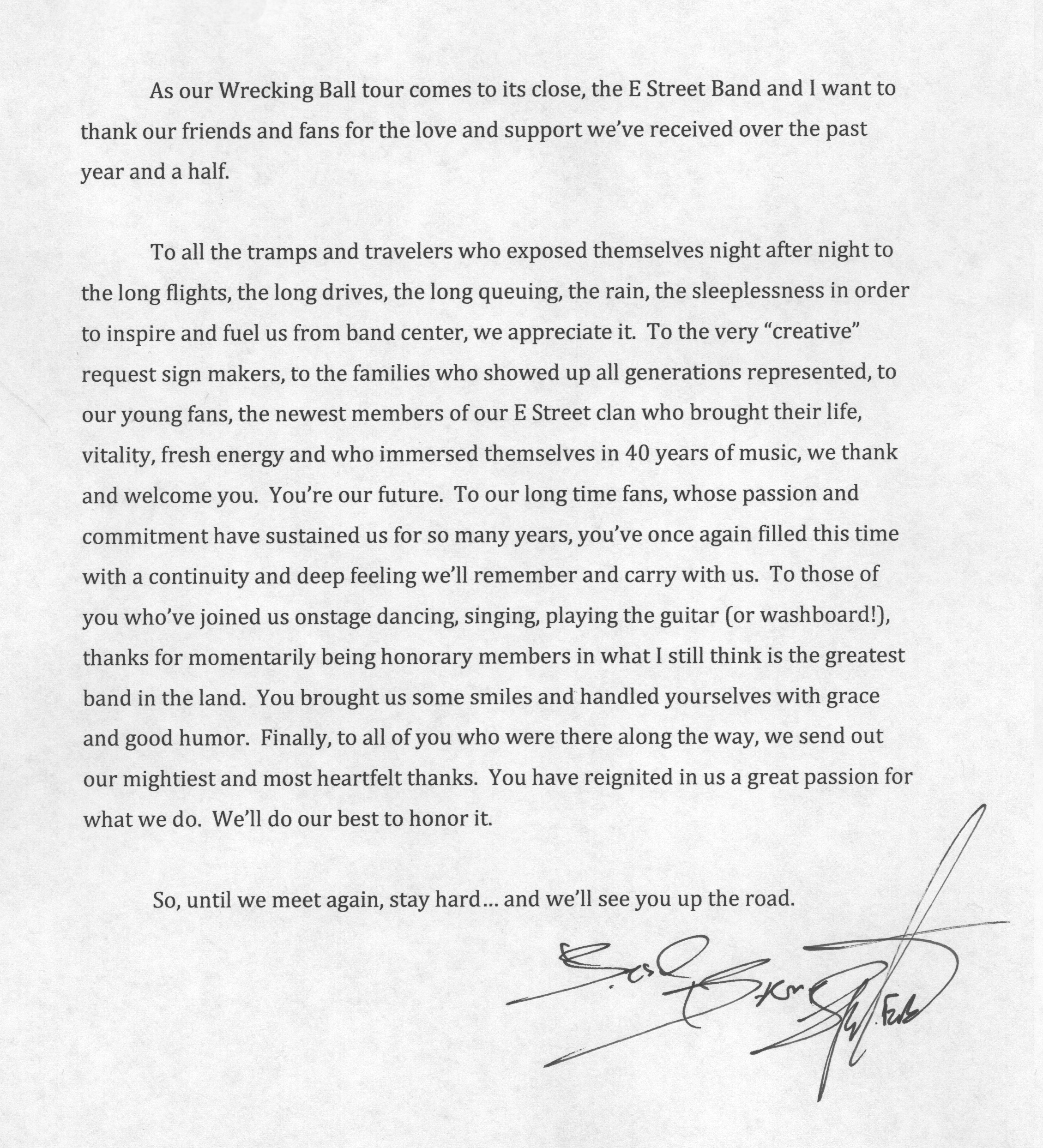 Thanks From All Of Us