The New Orleans Jazz and Heritage Festival is an experience unlike any other. As a celebration of unique culture and music, it makes sense that Bruce Springsteen & the E Street Band — a band that embodies originality and true musicianship — closed out the main stage on Saturday afternoon.

The crowd had been gathering up by the main stage all day (some as early as 10:30am), all hoping to witness the magic that happens during a Springsteen show. From the minute Tom Morello’s opening notes to the powerful title track “High Hopes” rang out, we knew that it had been worth the wait (even if we hurt “from the muscle to the bone”). The raw power in Bruce’s voice, in addition to Morello’s impressive solo with his teeth, made the song live up to its name, and gave us exactly that for what was to come.

“Johnny 99” was “an invitation” to get the party started. The band was getting into the spirit of the Fest; it featured amazing solos by Sister Soozie Tyrell on the violin and Professor Roy Bittan on the keys, and the E Street Horns brought a New Orleans feel to a Nebraska classic. “No Surrender” and “Badlands” followed, and then it was time for what Bruce called “a little summertime song”: “Hungry Heart,” which was done with help from the very eager audience. Then, Bruce brought out vocalist Rickie Lee Jones for “Jesse James,” a great Seeger Sessions song that once again prominently featured the horns and showed Nils Lofgren’s virtuosity as he played the banjo.

“The River” was a gorgeous, moving moment where Bruce further proved his brilliance when it comes to storytelling. We cheered the moment we heard the harmonica and felt the pain in his voice as he sang. After, Blind Alfred Reed’s “How Can a Poor Man Stand Such Times and Live” stood as a political statement piece and hearkened images of New Orleans’ Ninth Ward.

Then, an extra-passionate rendition of “Wrecking Ball” gave us all a chance for our voices to call out in appreciation, and for Bruce to note that it is not only Jersey that has swamps, that “We’ve got swamps over here, too!” in New Orleans. Another great Wrecking Ball track, “Death to My Hometown” came after, and with a count to four, the harmonica introduction to “The Promised Land” elicited screams of delight. Tom and Nils’ duet stirred the immense festival crowd from front to back, as did Jake Clemons’s solo.

After a quick guitar change, and a sip of water, Bruce said he wanted “to play a few of these [Seeger Sessions songs] for you today,” recalling his first triumphant visit to Jazz Fest in 2006. What ensued was “O Mary Don’t You Weep,” a great spiritual with Charlie Giordano on accordion, along with Soozie and the horns, giving it a true New Orleans twist. “Shackled and Drawn” succeeded, where Cindy Mizelle acted as a preacher right alongside Bruce, their vocals bringing down the house.

“The Ghost of Tom Joad” proceeded from there; having just splashed himself with a sponge of water, thereby drenching himself, and standing still on a dark stage at the start, Bruce looked every bit the protagonist of this song — lost, restless, and searchin’. It was awe-inspiring to watch Bruce and Morello go back and forth in a guitar battle, and Morello’s solo was just stunning. Next came “The Rising,” and “Land of Hope and Dreams,” and it was hard to want much more after such a powerful set.

Yet this is Bruce Springsteen, and he always has a surprise or two. He said that he had another guest that he wanted to bring out (as if Rickie wasn’t enough), and suddenly, out came John Fogerty, the scheduled act on the main stage for the following day. Together they performed CCR’s “Green River” and the electrifying “Proud Mary.” After Fogerty left the stage, it was time for the classic encore songs — “Born to Run,” “Dancing in the Dark,” and “Tenth Avenue Freeze-out” — before a couple last local specials.

Bruce thanked Jazz Fest, saying “it’s always a great pleasure and honor to play here — in the city where it all started. We wouldn’t be who we’d be, who we are…” which led right into a beautiful “When the Saints Go Marching In.” Bruce, Morello, and Patti Scialfa each sang the first three stanzas with such sweetness. “Pay Me My Money Down,” another fantastic Seeger Sessions song, brought the energy level right back up, and was the perfect prelude for a final full-band version of “Thunder Road.” The E Street Band’s heart-stopping show rocked Jazz Fest, and certainly celebrated the authentic, exciting spirit of New Orleans. 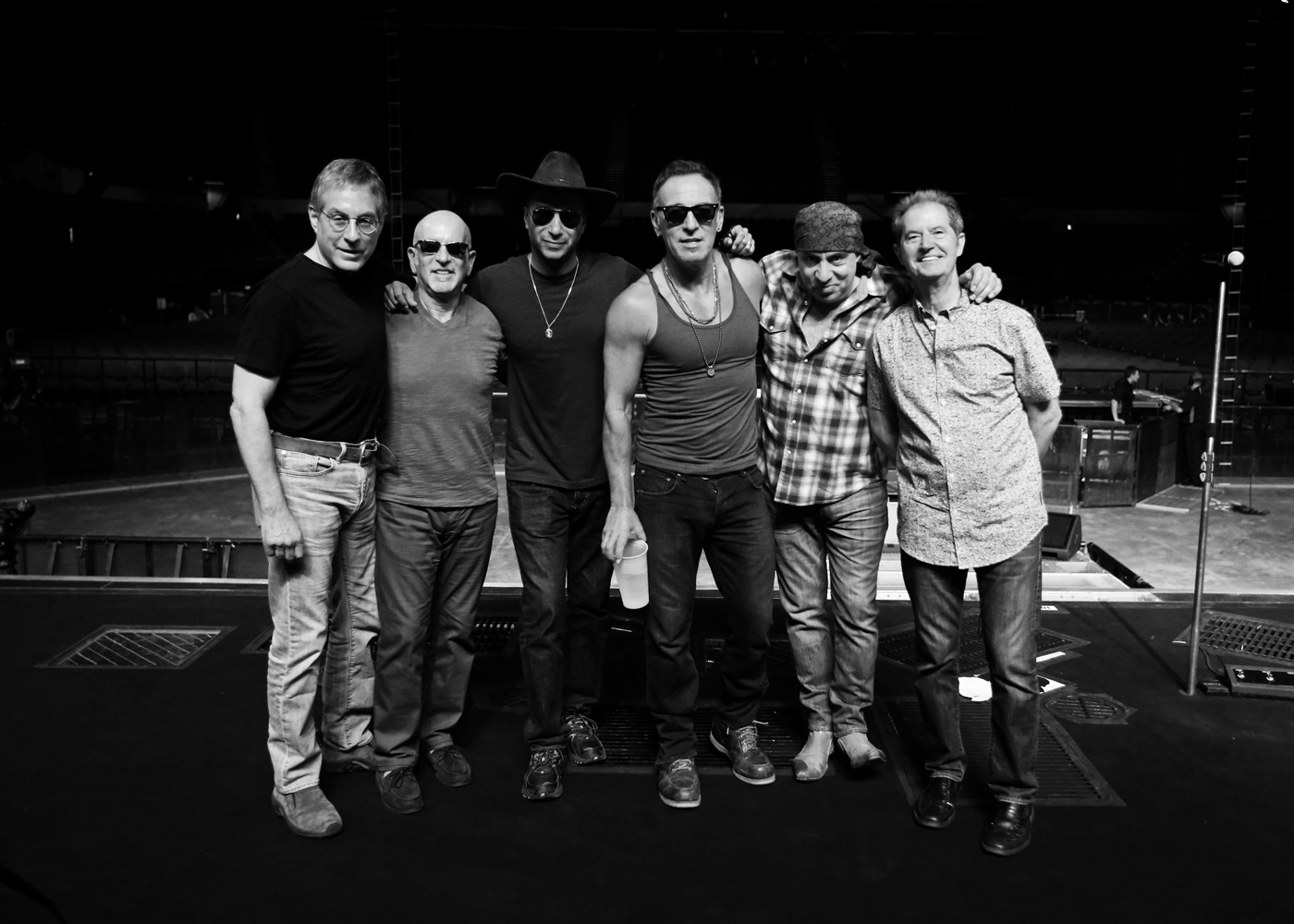 Photos from the road: Adelaide, February 12 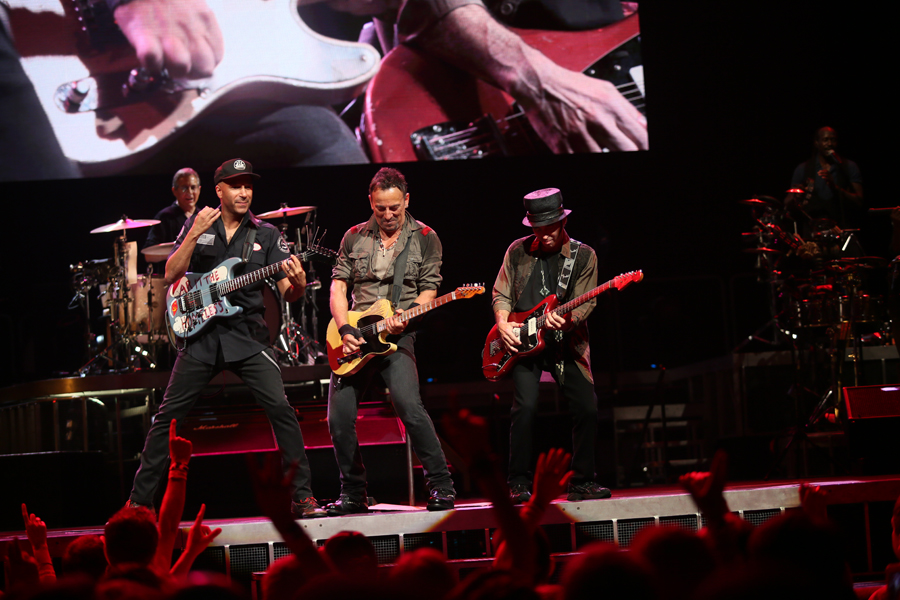 Photos from the road: Charlotte April 19 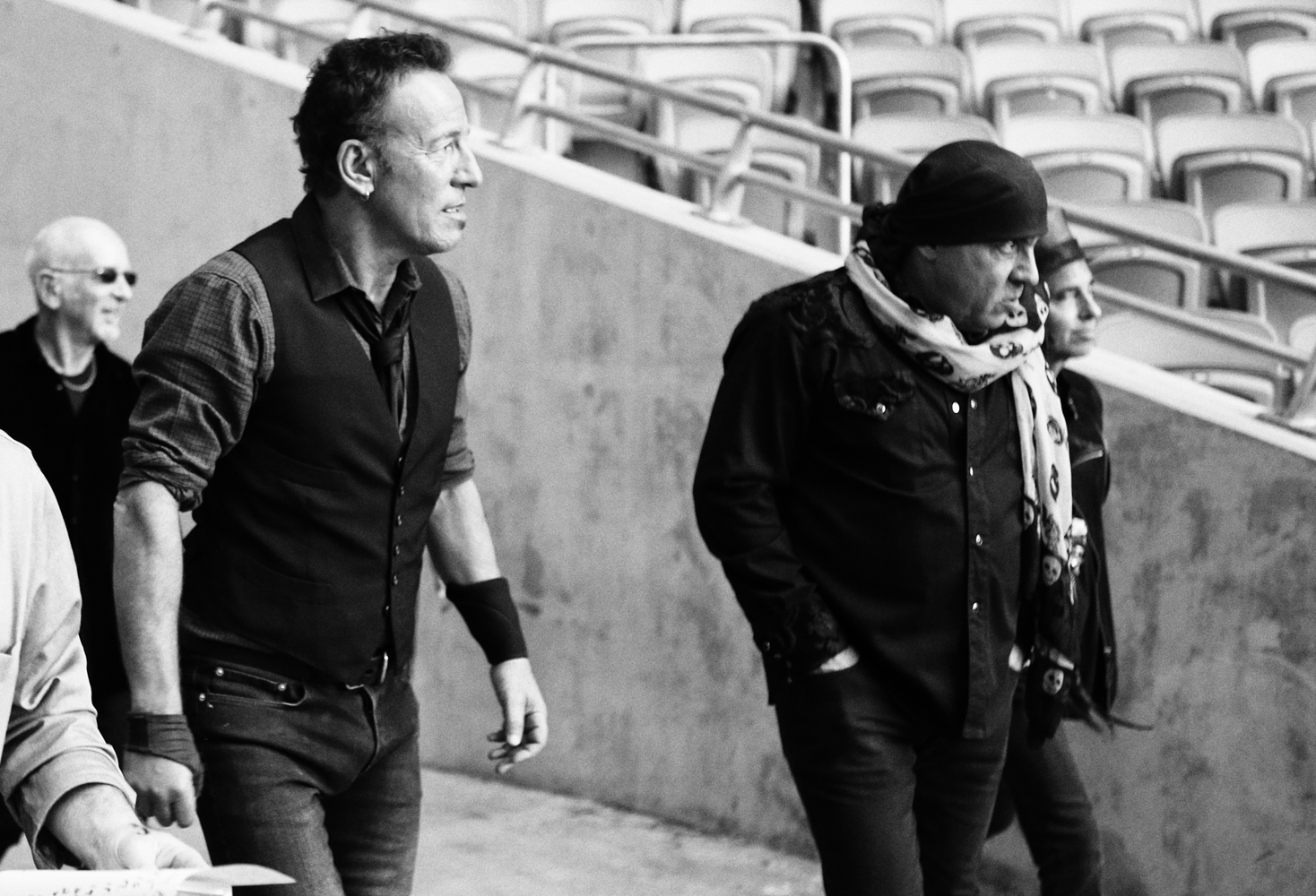 Photos from the road: Melbourne, February 16