Notes from the road: Uncasville, CT #2

It was an emotional night at the Mohegan Sun Arena, as Bruce Springsteen emptied the vault and the tank last night to close out the American leg of the High Hopes tour, and a 26-month run since the release of Wrecking Ball. As has been the case with this leg of the tour, the song selection covered a tremendous amount of ground, providing multiple story lines in the show.

The first part of the show featured six tour premieres in the first seven songs, including a world premiere. The opening number was the casino-themed “Roll of the Dice,” following Bruce’s reminder to the crowd that their losses at the tables made the band’s appearance in the Connecticut woods possible. Bruce, however, played the part of a winner at the tables, showering the front of the pit with champagne at the opening. “Leap of Faith” off Lucky Town was the next premiere, continuing Bruce’s recent re-exploration of seldom-played deep tracks off the 1992 releases.

The only non-premiere in the first segment followed: a cover of Van Halen’s “Jump” closed the circle for this leg, as the only other performance of the song opened the Dallas show which kicked off the U.S. dates six weeks ago. The only tour performance of “Frankie” was well received by the crowd, and it was clear that Bruce had given some thought to making this last dance a unique one, covering ground that he’d rarely explored over the two previous years of shows.

Even the sign requests which followed ventured into uncharted territory: “Santa Claus is Coming to Town” (which may have been a hint that we won’t be seeing the E Street Band again in 2014) was obviously something the band had never considered playing, as Nils Lofgren taught the song to Tom Morello on the fly. Bruce commented that he’d seen the same sign for “Seven Angels” at the past ten shows, and after working on it during soundcheck on Saturday, the Tracks song made its world premiere on Sunday. Bruce was unsure whether the band had ever played the song before, but the crowd in the pit let him know that this was a first. Darkness outtake “Don’t Look Back,” also by request, made only its fourth appearance since the end of the Reunion tour fourteen years ago. It took a brief discussion between Bruce, Nils, Tom and the back-with-the-band Steve Van Zandt to remember how to play the song, but they eventually found the chord they were missing. At this point, Bruce reined things back in, but only slightly. The final sign request of the evening, for the title cut from Darkness on the Edge of Town, brought everything back to more familiar ground.

The next couple of songs, a “doubleshot of Steve,” celebrated the return to the fold of Little Steven, who had missed the rest of this leg due to his other commitments. Steve was featured on both a rare performance of “You Can Look (But You Better Not Touch)” and the first High Hopes song of the night, “Frankie Fell in Love.” A searing version of “Adam Raised a Cain” led into the first signpost of the night. After 11 songs, number 12 was the first that had been a regular feature of the 2014 tour, “High Hopes.” In fact, the setlist almost never touched on what had been the tour standards. Not a single song that appeared on the Wrecking Ball album was played, for the first time since 2009, before the album was even recorded.

The back-to-back pairing of “Youngstown” and “Murder Inc.” was reminiscent of the Reunion tour, while the pairing of “Cadillac Ranch” and the tour premiere of “I’m a Rocker” called back to the days of The River — as did another Steve favorite, the outtake “Loose Ends.” The end of the main set was more familiar: the Morello-ized version of “The Ghost of Tom Joad” kicked off the final trio, into “The Rising” and “Badlands.”

The encore set was where the emotions really started to flow, as Bruce seemed to realize that this latest journey was coming to an end. The encores kicked off by going straight to the exuberance of “Born to Run,” house lights up, everyone singing along. This was quickly followed with another pair of songs that showed just how much having Steve back on stage with him meant to Bruce. As usual, “Ramrod” featured a heavy dose of Steven vocals, while Maureen Van Zandt was Bruce’s lucky partner on “Dancing in the Dark.” “Tenth Avenue Freeze-out” followed, but from there, things ended on a highly emotional, unusual note.

After bringing everything to a stop after “Tenth,” the lights came back down. Bruce checked to make sure the band was all set, and called for the only version of “Jungleland” played in the U.S. in 2014. After rocking so hard all night, the powerful “Jungleland” seemed to finally drain whatever energy the indefatigable Bruce Springsteen had left. But he was not the only one moved by the song. After concluding his uncle’s famous sax solo, Jake Clemons stood at attention for the remainder of the song, perhaps reflecting on what the past 26 months have meant to him. The crowd was pin-drop quiet on the concluding verses, as the exhaustion in Bruce’s voice perfectly matched the mood of the song. He went over to Jake and spoke with him briefly, we can imagine telling him how proud his uncle would have been of him. It wasn’t speculation to say that there appeared to be tears in Jake’s eyes.

The horn section was readying their charts for whatever was supposed to come next, but Bruce seemed to surprise everyone by bringing the band down front to take a final bow. Oddly, Bruce never introduced the band on this final night of the tour, and laughing, perhaps at himself, he filled in for the usual adjective-filled conclusion by telling the crowd that they had just seen the “legendary E Street Band.” This would have been a very odd place to end the show, which Bruce seemed to realize, as he signaled for the pump organ. Thanking the four million-plus fans who had seen the band over the past two years, he told the crowd that “while we’re apart, just remember…” and concluded the tour himself with “Dream Baby Dream.”

“Spill the Wine” and “Seeds” From Hunter Valley, February 23 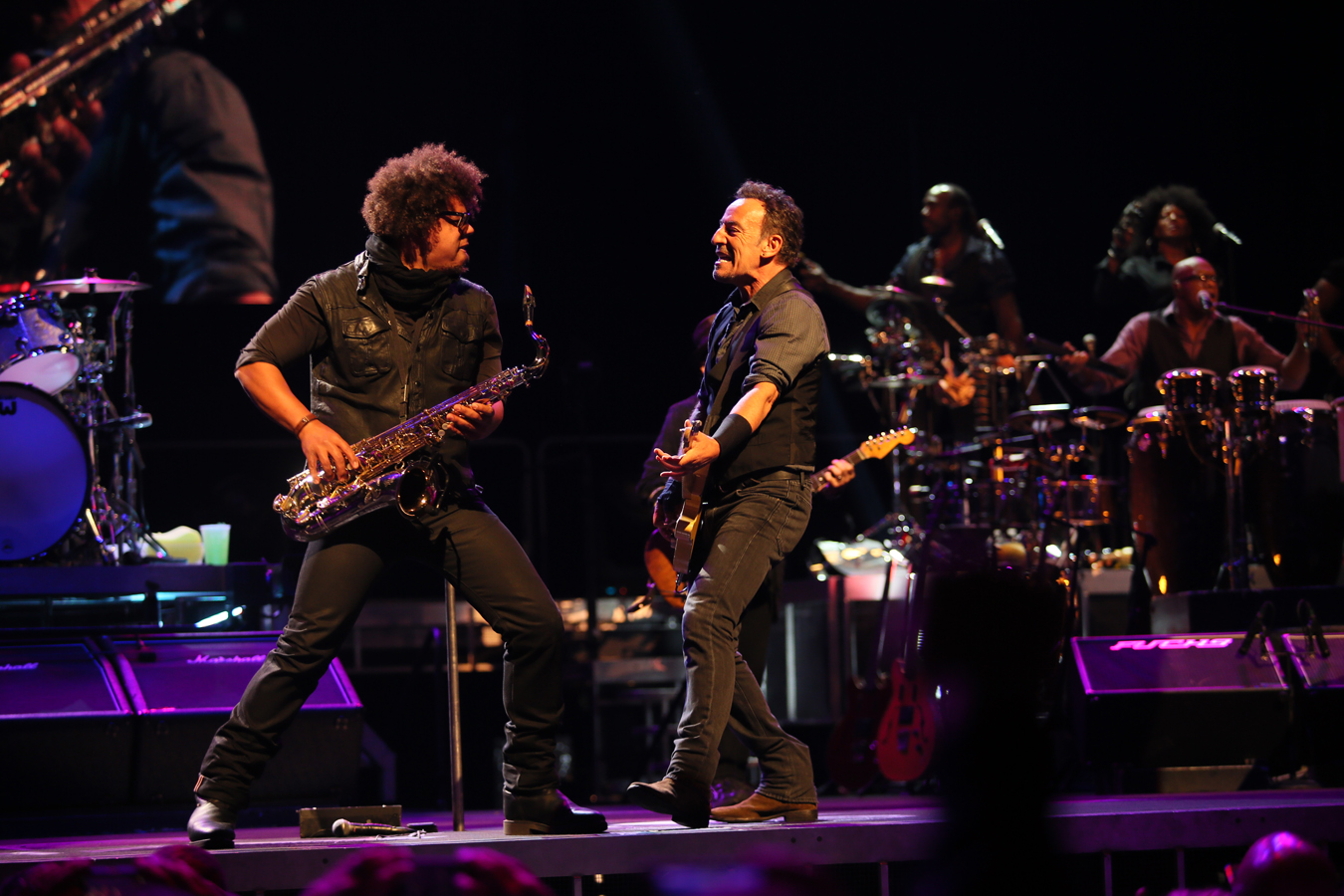 Photos from the road: Cincinnati April 8